This is the story of how it all began, how the garden was beforehand, and how it was designed and built. It was all transformed over the course of one long winter in 2008, in Melbourne, Australia. The climate here is classes as cold, just in case you’re wondering!

My garden started as a collection of various plants – trees, shrubs, flowers, berries and herbs – in pots.

It grew over three years to what you would term a large scale container garden, with well over 100 medium to large (40-60 litre) nursery pots, with many more small ones. The back yard looked like a plant nursery, as you can see in the pictures below. 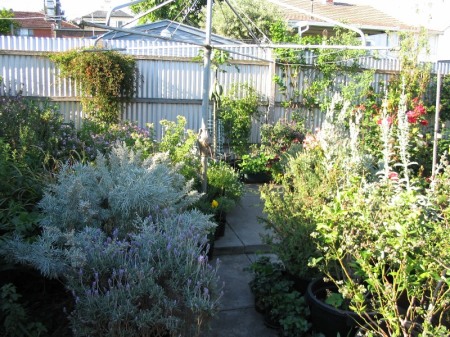 The before photos – facing North 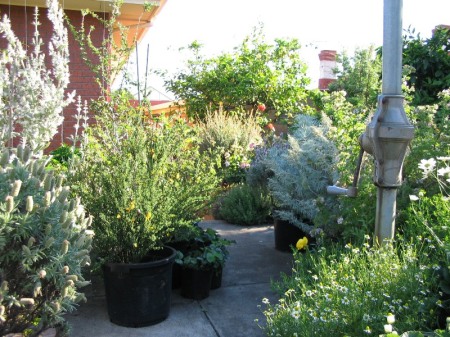 The before photos – facing South 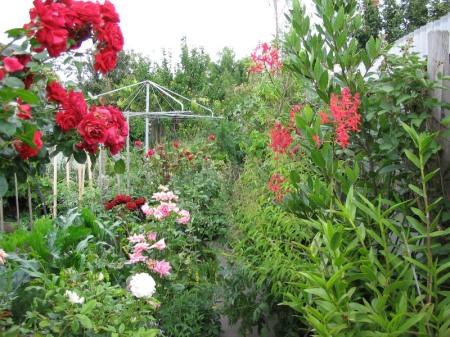 The before photos – West view along the fence

This last picture shows about three quarters of the length of the back fence, which is about 20m (60 feet) long. You’d be hard pressed to see that there are lots of pots under all this on the right hand side, and the narrow gap is actually a concrete path.

The old Aussie icon, the Hill’s Hoist galvanised iron clothesline, is visible in the background, a real piece of Australian history. This was eventually ripped up by the way (not by me!) as you’ll see in the pictures of the months to come.

What is pictured is about one-quarter of the backyard, filled with a myriad of pots. I hadn’t bothered to photograph the rest because it was just a complete clutter…

Next, I had to water all these pots. So, then came a 110 point drip irrigation system for the pots which I put in.

With all the plant matter being generated after pruning, there needed to be a way to re-use all this organic matter. The single compost bin grew to three compost bins and two worm farms.

After getting stuck into seed harvesting and propagation, I had plenty of plants and seeds to give other people. Additionally, this allowed me to swap with others to get more types of interesting plants… This was getting big!

After two years of growing a whole garden in pots, I realised I had to do something about all the plants. The idea of regularly repotting all this, and the amount of potting mix require, would be inconceivable. More importantly, they wouldn’t survive too many more hot, dry Melbourne summers, so I decided to plant them in the garden beds. Since this place isn’t mine, this was a bit of reluctance, so as part of the negotiations I offered to create a proper vegetable garden with raised sleeper beds and paths between them if I were granted permission to plant it all in the ground.

So, off to design the garden and gather all the materials. The adventure begins!